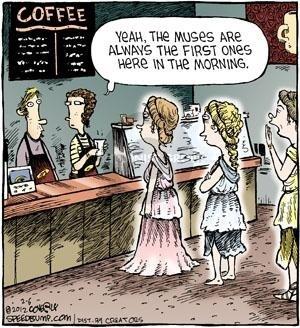 I used to think that an artist’s Muse was simply the subject of the project. The painter’s Muse sat before him, even if only in his mind’s eye, as his brush swept across the canvas. The musician wrote music that emanated from his soul when thinking of the persona of his Muse. A writer followed the promptings of the one person, imaginary or real, that most energized and motivated them.

Yeah, I was wrong about that.

A Muse isn’t a person. Not necessarily. And a Muse isn’t a constant; you don’t just have one for your entire life.

Now, it’s true, when you read about many famous authors of the past, you’ll uncover mistresses, lost loves, and unrequited longings cited as that author’s Muse. You’ll see them show up in classic, lusty tales of romance and heroism. As the protagonist in multiple stories in various settings. Or depicted over and over in paintings and sculpture.

But not every Muse is a Goddess of desire – nor is she even human.

A Muse is simply what inspires a particular artistic piece of work. The inspiration of which is so intense and ever-present, that it becomes personified and the artist can “feel” its presence and its impact on the work.

Too often writers seek out that end-all, be-all persona that they can tag as “Muse” before they allow inspiration to lead them on in their work. And when they can’t find that Muse, they claim writer’s block and blame it on the lack of said Muse.

It’s a bit of a catch-22 and serves no purpose other than to distract the writer from writing.

For me, my Muse changes. Typically, I take inspiration from “channeling” whatever character it is I’m trying to write. I allow them to show up in the room with me. I visualize them as real and tangible people. And then I hear what they are talking about. I watch their mannerisms. I don’t stop it; I let it unfold. And I write like crazy.

I guess that’s very Charles Dickens of me, though I’d never claim to equal his genius. He distinctly heard the voices of his characters in his head, as well. There are a surprising number of writers who share a similar process. And I, like them, often feel like it’s not actually me writing the story, but the characters themselves. They tell me what to write.

In my current novel, the person I see most isn’t even the protagonist. I see the wheelchair-bound child she has to abduct in order to protect him from his violent, deranged father. He quite literally tells me what his brother is thinking or what Jenna (his “abductor”) is feeling. He tells me what’s in his head, what he sees, and what he fears.

I can remember the first time a character showed up for me like that. It was so weird. I thought I must be losing my mind! But the imagination is a powerful thing, and for someone like me who is also extremely visual, I’d developed an ability to conjure up the characters I was writing about in a near tangible way. I’d opened a deep level of my creative subconscious and allowed it to interact with my conscious self. Because it’s typically while dreaming that I develop a character, or at least a storyline, in the first place. In fact, probably every story I’ve ever written started as a dream.

But in the beginning, because it seemed so weird, I pushed back a bit. I didn’t really want to fully realize these characters in a way that I could actually hear them!

And when I began copywriting, there wasn’t a “character” to conjure anyway, so no Muse needed.

Except sometimes there was (is) a need. Even in copywriting one has to understand that “character” of the audience we are trying to compel. Not to mention, pleasing the client, working alongside other vendors (aka: other creatives and their own ideas), and satisfying the almighty Google and SEO. Those are definite reasons to seek inspiration.

So I had to figure that out.

Music became my Go To. It quieted the noise around me, including my own scattered thoughts. It settled me physically. It gave me an anchor. What I didn’t realize was that the mood set by the music I was listening to, played a significant role in the content I produced. It inspired me to write with eloquent, sassy, romantic, or heroic undertones. It took me on a creative journey that was different from what I initially set out to create.

Without even knowing it, music became my Muse.

Many years ago, at a precarious time in my life, I was mesmerized by a painting of a woman in red, her back to me in mid-turn, face obscured by a gloriously oversized summer hat. The mystery of her. The confidence, the strength she exuded; it kept my eyes glued to the portrait. And then I saw myself in her. She became me.

I became my own Muse.

Over the years, I can point to movie characters, book characters, song lyrics, motivational quotes, characters I write, and my own children as Muses along the way.

And I learned to stop pushing back. To just let the inspiration come in whatever form it needs to.

You need merely look around you to find inspiration. Give yourself a calm, quiet moment to breathe. Look more deeply, listen more acutely; ignite all your senses and allow inspiration to find you right where you are.

The Muse relies on you. You do not rely on the Muse.

Skip the desperate search. Just relax. Be open. The Muse will come to you even if from the most unexpected places!

Do you have a Muse – or many? What inspires you to create? 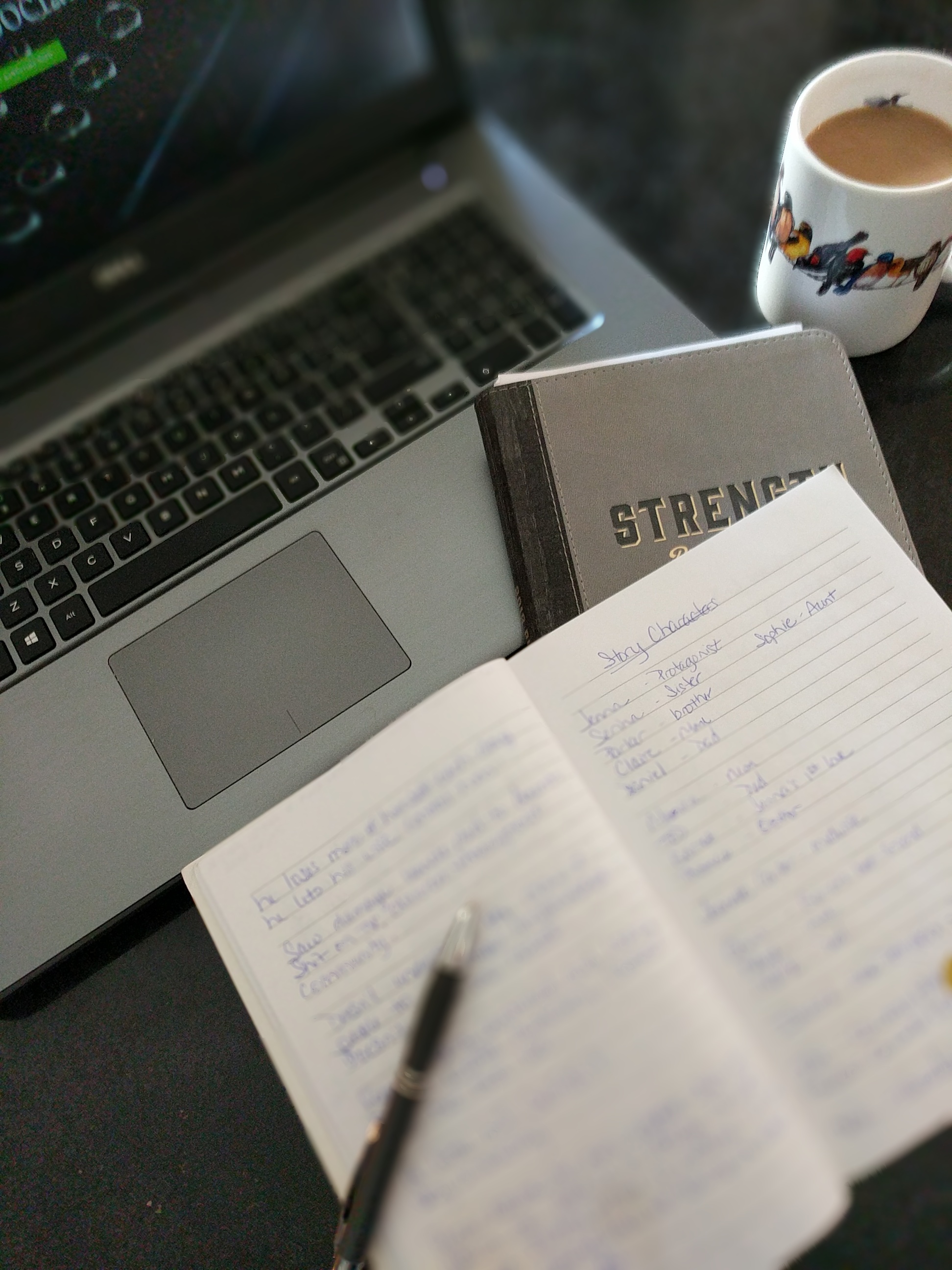 I am a writer.

It’s in my blood. It’s in my soul. It’s a life path pre-determined by God, the Universe, or my own eternal being plotting out my “what I want to try this life around” storyboard. I don’t know how writing became a reverberation in my veins, but it did. It is.

Writing is how I sort out my thoughts. It’s how I make money. It’s how I teach. It’s how I create. Writing is (almost) my greatest source of energy. Reading battles hard for that honor. My children and family are always going to claim the actual top spot, although it’s a completely different kind of energy!

I write all day long. Every day. During the week I’m writing websites and marketing material. I’m writing training and speeches. I ghostwrite blogs and craft social media posts.

On weekends, I summon my muse. And for me that can be different things on different days. Regardless, I write fiction. The kind that thrills and messes with your head. Stories that make you hate the bad-guy and blindly love the good guy; until something happens, and you get confused and start doubting all the things you think you know. The kind that doesn’t always have a happy ending, unless it was the antagonist you were meant to root for all along.

The copywriting and the fiction writing are all intertwined within me. My mom used to say she had eyes in the back of her head, meaning she knew the shenanigans us kids were up to without ever having actually witnessed the events. I feel like I’ve inherited her double set of eyes; however, mine are writing eyes and gain me insight from both a copywriter’s perspective and a fiction writer’s one. I see everything as a story. Whether I tell it in the context of marketing or in the context of a thriller, it doesn’t matter – it’s all story worth telling.

So I thought it was about time I bring my fiction-writing self into view within my copywriting business.

The plan is to change my blog about copywriting and marketing, into “The Writing Journey,” which will focus on my fiction work. The posts will sound a bit like I’m writing in my journal, but you’ll get a glimpse into the thoughts (sometimes clear sometimes frazzled), the process (sometimes clear sometimes frazzled), and the lessons I’m learning (hopefully always clear) as I work to finish my manuscript and send it out for publication.

I’ll publish an entry weekly, and will likely ask for comments, opinions, and even advice. I hope you’ll help a girl out! And while I know some people won’t understand the melding of my copywriting business and my fiction-writing career, to me, it’s all part of who I am, and it all makes me a better writer.

Are you with me?

Stay tuned next week for: The Kid in All of Us. The post discusses the impact the games we play as a child has in developing our reading and writing preferences as adults. It’s kinda cray.