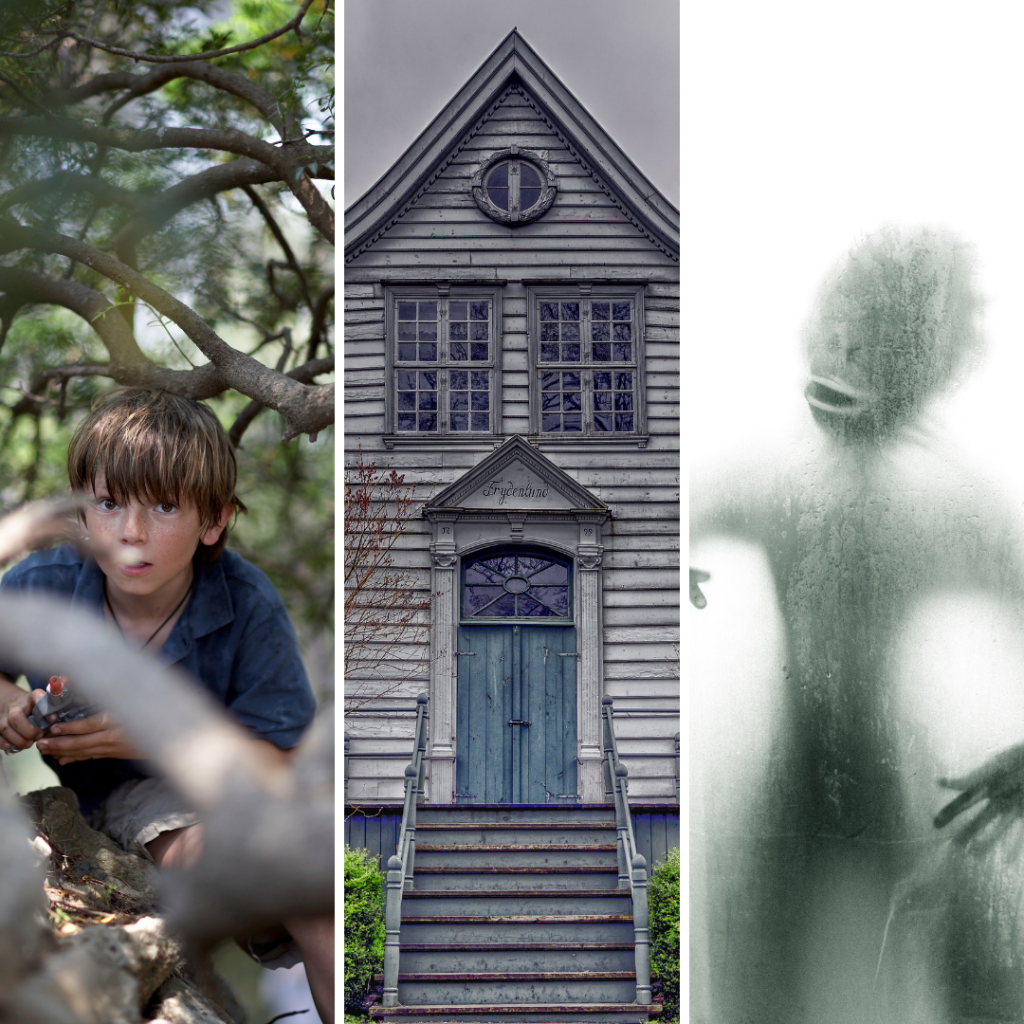 I recently read a passage in a writing book discussing how just about any childhood game you can think of has been drawn upon in stories, TV, and movies throughout time. As examples, the author cited the romance of Ken and Barbie, the mystery of Hide and Seek, and the boys will be boys “Hangover” antics of pretty much every male at some point in their life.

She then posed a question: how have your childhood games influenced your choice of genre today?

I’d never made that connection before; never even thought of it.

As a kid, my brother and I used to go to the ravine near our house and pretend that we were on the run. We’d have to survive in the wilderness while not getting caught by whomever was searching for us. The backstory didn’t really matter. We just knew that people, and most especially airplanes, would mean our capture, torture, and possibly death.

We’d stay out there from morning till dusk. Making mud pies, hiding, wading in the creek to not leave tracks, fashioning fishing poles to catch our dinner, creating weapons, and figuring out which way was north. (I don’t know why we always needed to head north.)

At night, back home, we’d play Bloody Murder in the yard. I remember the breathlessness and skin prickles of tip-toeing toward safety, knowing I was being hunted while calculating the shortest path to base. On the flip side, when it was my turn to be the murderer, I knew I had to find the right hiding place; one that kept me concealed but also allowed me to leap at a moment’s notice. I could feel my pulse in my ears. I could hear my own breath coming in gasps. I felt my mind race through the pros and cons of running for one victim or the other. I became merciless.

Other days, we’d ride bikes through the neighborhood, having each turn decided by the sight of a car; we must turn the opposite way, because we must avoid cars at all costs. Even if it meant cutting through the woods where venomous snakes and kidnappers alike resided.

During the winter we’d hang sheets with our sisters from the beams in our basement, creating mazes, a wrong turn of which would mean irreparable harm to the wanderer. Or we’d turn the whole place into a haunted house complete with ghostly apparitions, unexplained sounds, and levitating objects. Sometimes it became the lab of the maddest of all scientists. Goo, gunk, and brains.

Once, we snuck into an old abandoned house just beyond that nearby ravine. The graffiti symbols painted on the walls meant nothing to us; nor did the red paint on the table in the kitchen that dripped and splashed down onto the floor. We just thought we were cool to have found our way into the perfect hiding spot from all those circling planes. It didn’t occur to us that we were trespassing in the heart of an Occult-worshiping sacrificial base.

You know how I found that out a few years later?

I thought I saw a little girl looking out of the upstairs window. And I thought she looked just like the little girl on the milk carton at school the previous week. I told my mom. She thought I imagined it and was being dramatic. In her defense, I was always being dramatic. But eventually she called the police. They checked it out and told my mom the awful things going on in that place. Animal sacrifice, and seances, lots of drugs, and who knows what else. There was no sign of the girl and they didn’t believe there was any reason to suspect she’d been there. I probably actually did imagine it given my creative dramatics.

It was my brother who pointed out that the red “paint” was likely not paint at all.

I remember being more floored by how harmless the house looked from the outside than anything else; the juxtaposition from exterior to interior. I shudder now just thinking of it.

So as I ran and hid down my memory lane to answer the never before asked question of me, it became glaringly obvious, that yes, the games of my childhood had most definitely affected my choice of genre. Because today I write thrillers. Stories of people on the run, trying to survive. I write about the supernatural and ghostly visits. I write about evil dwelling in seemingly innocent places. I write about violence and love and all the spaces in between that create the people who perpetuate horrible evil and those that survive and rise up from it.

It seems crazy to me that I’d never recognized the influence of my own childhood antics as shaping my genre choice until today. I guess we often miss the most obvious, though, don’t we? At least that’s what I’m counting on every time a write a plot twist. I bet my brother will still see ’em coming!

What about you? Do you recognize the influence of your game play as a child on the stories you read and/or write today?